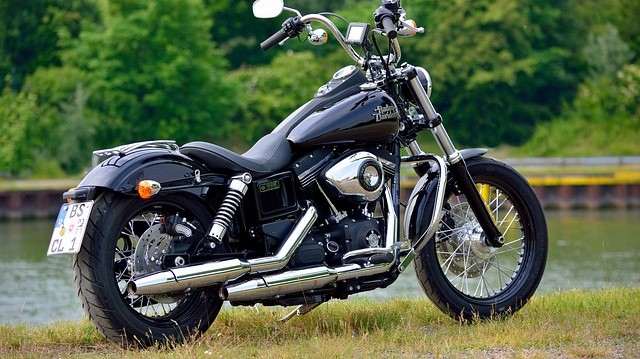 Many years ago, when I lived in a suburb of Boston, I called the local police in the middle of the night because neighbors were partying with blaring music and loud shouting.  I said to the officer who answered that I wanted to report a “disturbance of the peace.”  “A what?” he asked.  “A lot of noise,” I translated.  This story has been told at my expense in many circles to illustrate the old-fashioned “turns of phrase” I sometimes use.  (Just as an aside, I have also been teased mercilessly because I once said, “so-and-so had a baby out of wedlock.”)

This post is about motorcycle noise, so, in a manner of speaking, it’s about disturbing the peace.

Let me say up front that I love motorcycles.  A highly polished black and silver Harley Davidson is a thing of beauty.  Riding with an experienced cyclist can feel exciting and freeing.  So, I’m not prejudiced against motorcycles or cyclists.  I know a couple who have taken cross-country motorcycle trips as seniors and I admire their sense of adventure, their courage, and their style!

Loud motorcycle noise, however, is definitely a “disturbance of the peace” in my book.  When I lived in Massachusetts one of my greatest joys was sitting on our screened porch on a warm summer evening with a glass of wine and a book, or engaging in quiet conversation there with friends.  I was livid when our peace and our conversation would be interrupted by the deafening roar of a motorcyclist racing up a nearby street, revving his engine to the maximum.  Often, as I was falling asleep at around ten p.m., I was incensed to be awakened by the same cacophony – inconvenient for me, but even more so for the neighboring parents of small children whose interrupted sleep would make them cranky the next morning.

Early on, shortly after we built the porch, I called the town police to report the disruptive motorcycle noise.  They indicated little interest but said they would “look into it.”  The noise continued, multiple times daily.  Next, I dropped in at the police station and expressed my concern.  The duty officer behind the glass wall said that it would be impossible for the police to catch such a cyclist in the act of making the noise because by the time they arrived on the scene he would have sped on his way.  I suggested that just parking a cruiser in the vicinity for half an hour on a summer’s evening would enable them to catch the culprit.  They suggested I call the next time the disturbance occurred.  I gave up and the roar of engines continued.

Several years later, after my retirement, I finally had the time to think about a more effective approach to the problem of excessive engine noise in my neighborhood.  I asked the candidates running for town council to suggest solutions (hinting that the one who provided a successful result might get my vote.) Their answers ranged from presenting the issue at a town council meeting to organizing a petition with my neighbors.  I chose, instead, to write to the town’s police chief.  He responded, after some delay, by saying that he would raise it at his next staff meeting to see if his duty officers could suggest solutions.  He did not report back to me the results of this consultation and the noise continued.  Finally, I moved away before having the opportunity to approach the town council or to organize my neighbors.

What is the point of this story-telling?

I am presumptuous to speculate on the reasons why cyclists loudly rev their engines, but I will do so anyway.  Is it the thrill of accelerating quickly?  I wouldn’t want to put brakes on the thrilling activities of others, but it seems that a muffler might mitigate the consequences for those nearby. Is it selective defiance of the restraints of society?  Which of society’s restraints would the cyclist want to be enforced for his or her own comfort and peace? Is it a deliberate attempt to ruin his or her hearing?  Or is it simply a “f— you” attitude?

Whatever the explanation, at its roots, loud motorcycle noise demonstrates lack of respect for those nearby – a lack of interest in or care for how the cyclist’s behavior affects those in the vicinity.

This post completes my “pet peeves” series:  disrespectful bicyclists, dog owners, and motorcycle noise perpetrators.  Respect arises from, among other things, thoughtful reflection on how my behavior may affect the lives of others – it’s the good old “golden rule” principle.  Do I want to be endangered, limited or even just interrupted by others?  Does exercising my so-called rights or liberties harm or inconvenience my neighbors?  These are “old-fashioned” questions like the phrase “disturbance of the peace,” but perhaps it’s time to revive them.