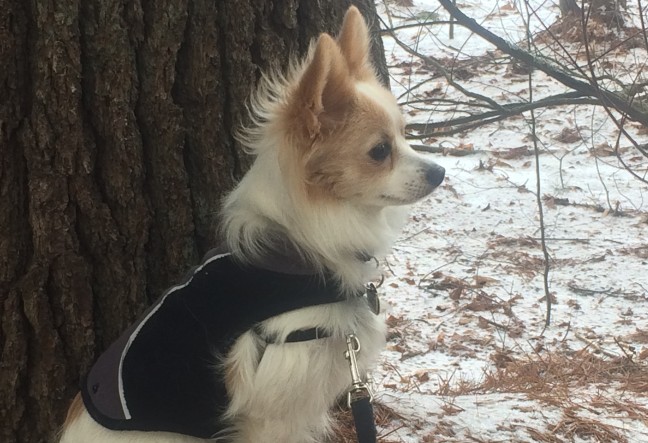 A year ago, I adopted a dog from a shelter called “Save a Dog” in Sudbury, Massachusetts.  I had longed to own a dog for many years but had always felt it would not be fair to the dog since I worked long hours, far from home and could not give it the company, exercise and care it would need.  A year and a half after I retired, I decided it was time for the great dog-parent experiment.  Admittedly, I was not as prepared as I should have been, having no clear idea how much time, energy, patience and money it would involve.  When I fell in love with the first puppy I met, I didn’t listen to advice about looking for an older, lower-energy dog “at my age.”

However, a year later and much water under the bridge (as well as many nights of wanting to tear out my hair in frustration), I now have a beautiful, happy, and relatively well behaved 18-month-old Paperanian (Papillon/Pomeranian mix), named Digby.  I have learned not only a great deal about dogs in the last year, but also about dog ownership and dog owners.

One of the saddest lessons I’ve learned is how unwelcome dogs are in most public places. Signs abound in stores, hospitals, malls, hotels, tourist sites, restaurants (of course), parks, campuses and even on wooded trails. I had no idea that a well-behaved dog and a responsible owner would find so many barriers to enjoying ordinary daily life together.  Occasionally I would see a water bowl outside a store and I would think, “Oh, this place must be dog friendly!”  Yes, but outside only.

However, as I looked around more carefully in my neighborhood, populated by quite a few dogs, I began to understand why dogs have, in large part, been banished to their own homes and yards and to dog parks.  I walked the neighborhood with my pup, pockets stuffed with “dog waste” bags, and noticed that the streets and sidewalks were defiled everywhere with the excrement of other people’s pets.  I jokingly put words in my dog’s mouth: “Mom, why do you pick up my poop all the time when other moms don’t do so.  I must be pretty special.”  On our walks through the woods the waste would be even more pronounced in spite of abundant signs pleading with dog owners to pick up after their pets.

I also saw signs saying, “Dogs allowed on leash only,” and my heart would sing.  However, no sooner had Digby and I entered the permitted area than an off-leash dog would dash up to us, followed at a distance by its unconcerned owner.  Digby, who is smaller than many dogs, would cower behind me and I would cower behind a tough but false cheerfulness about the situation.

“Jumping up” is another problem in public places. Yes, it’s difficult to teach your dog not to jump on strangers or friends, but it can be done.  Though Digby is not perfect, he’s a lot better than he was as a younger pup.  It’s taken a lot of persistence with him, and a lot of educating of those who want to greet him, to get him to the stage where he will squirm with excitement at someone’s feet, sit upon command most of the time, and wait for his new friend to bend over and slowly and gently scratch him under the chin.

So, what is the point of all this storytelling?  Sadly, I believe the disrespectful behavior of many owners causes dogs to be unwelcome in so many settings.  If more owners would pick up after their pets, keep them leashed when required, and teach them how to behave in public, dogs would be better integrated into our society.  Wherever I go, people stare in awe at service animals (the legitimate ones) who are so calm, well mannered, and expert at their trained tasks.   No one expects such model behavior from a pet, but certain minimal behavioral norms are the entrance key to more “allowed” places for dogs.  “Pick up” means pick up; “on leash” means on leash; no jumping on people, no barking incessantly.  Again, it comes down to respecting the rules – there is a reason for them – and respecting the needs of others.

I am thrilled when a public place, like our new bank in Maine, allows us to bring our dog inside while we do business.  I’m going to be extremely careful that he is as well behaved as he can be, politely greets the staff and other customers who want to meet him, and is not a contributing factor for a “no dogs allowed” sign on the front door in the future.